Action on the 2020 decade: Measure, reduce and contribute 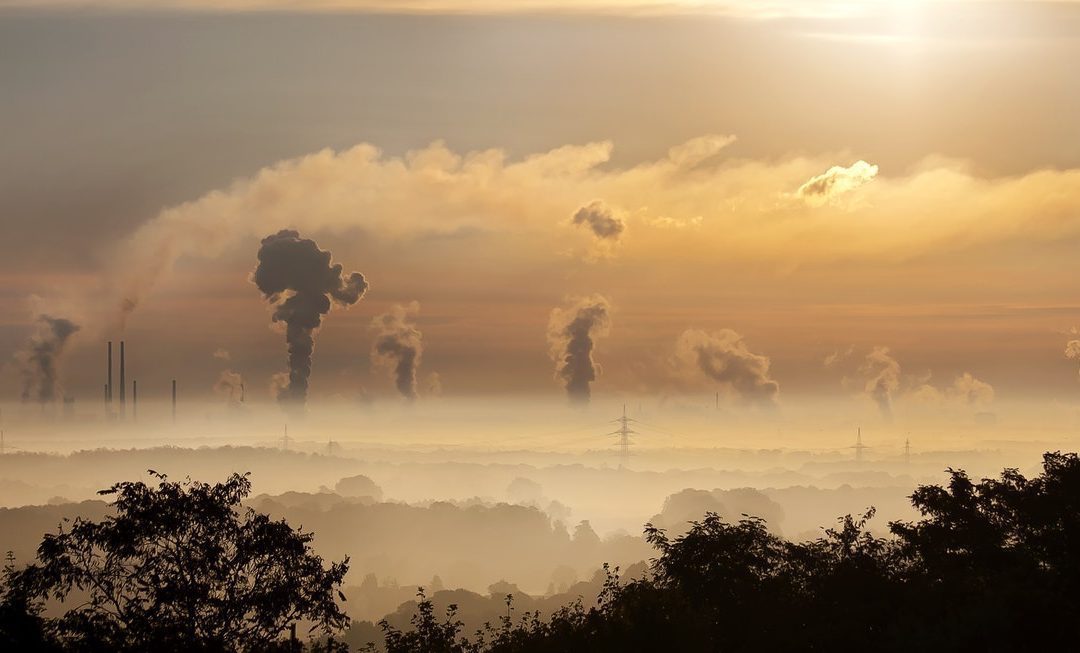 Since spring 2019, we have witnessed a 4th wave of demand for carbon credits[1]. Meaning additional GHG reductions have been qualified, quantified and verified by a third party, allowing their conversion into carbon credits. Various initiatives support this demand. During the COP 25 held in late November in Madrid, more than 500[2] B Corp certified companies, committed to being carbon neutral by 2030. The same is true for the Science Based Target initiative[3].

Quebec shares this renewed interest to the point where the media are discussing it increasingly. With regards to the quantities of carbon credits available on the voluntary market, it is the Verified Carbon Standard (VCS) program [4] – whose credibility is established on the world market – that opens the parade with 80 million tonnes of carbon credits certified in 2019 [5]. This represents a 400% increase from the low point reached in 2016. For the year 2020, the projection is more than 100 million. This increase in demand may indicate the start of a new wave. 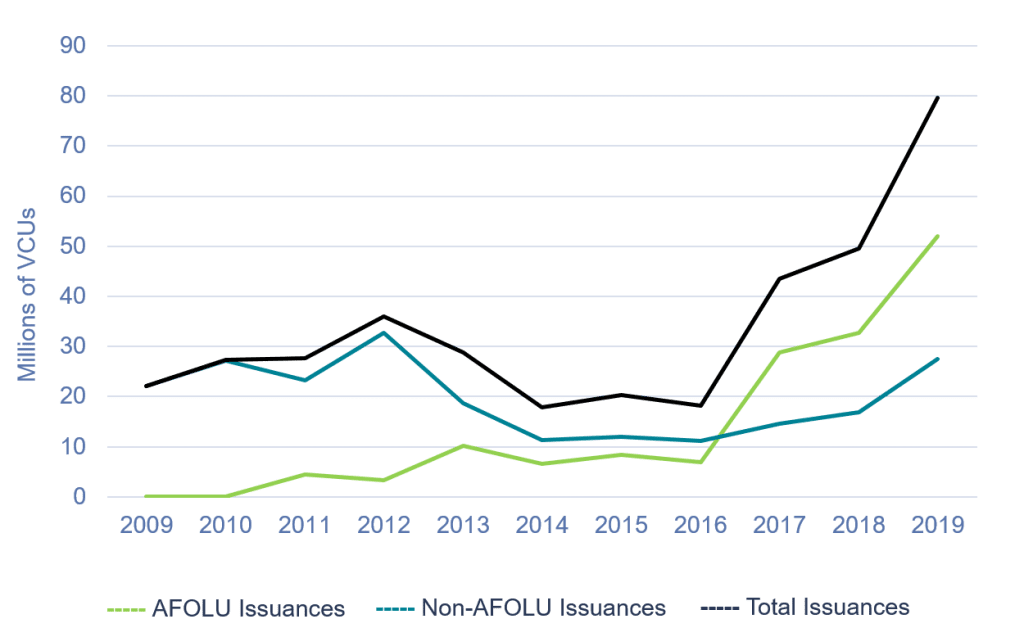 Since the start of this 4th wave, we have heard many times the terms “becoming carbon neutral” and “path or road to carbon neutrality.” But what exactly do they mean? The Quebec Charter of the French language defines carbon neutral as “which aims to reduce greenhouse gas emissions released into the atmosphere or to compensate for GHG emissions that could not be reduced by taking environmentally responsible actions[6]“. Therefore, being carbon neutral consists in completely offsetting a carbon footprint[7] (CF) that has been previously measured.

On the other hand, the road to achieving carbon neutrality requires setting a target to reduce greenhouse gas emissions by, for example, 2020, by 2030 or by 2040. This approach is valid for individuals, corporations, organizations, and municipalities as well as for all levels of government. This action complements the various regulated mechanisms which set a price on carbon and which is included in the preamble to the Paris Agreement[8]. This path to carbon-neutrality is broken down annually into three actions:

Measuring the carbon footprint, which includes determining the scope of calculation of GHG emissions. The carbon footprint is a portrait of the main sources of carbon emissions of a company or the consumer for the period between January 1 and December 31. GHG emissions are divided into four categories/sources, namely (1) energy, (2) waste, (3) the production process and (4) transport which are found in scopes 1, 2 and 3, according to the principles of ISO 14 064 part 1: 2018.

Reducing by implementing eco-responsible actions and measures, such as changes in consumer behaviour or acquiring and using clean technologies to reduce GHG emissions. Therefore, any gesture that has a direct impact on increasing or decreasing the carbon footprint.

Compensating residual GHG emissions that could not be reduced through the acquisition of carbon credits equal to the remaining balance of the carbon footprint. Some people use the term contribute instead of compensate. They argue that it is impossible to obtain a zero carbon footprint because, as Newton said, action = reaction and that every gesture has an impact. Thus, buying carbon credits is to recognize one’s limits as well as participating and encouraging the efforts made by others. It is an additional incentive, a co-financing, to all government measures accelerating the transition and change.

For example, Will has been carbon neutral since 2007[9] and joined, in January 2020, the carbon neutral movement of B Corp certified companies[10]. Since 2008, or since the beginning of the  Sustainable Community (SC) project[11], we calculate our Carbon Footprint annually. What we cannot reduce, we contribute to the climate efforts made by others by purchasing carbon credits from our Sustainable Community project. In 2018, we implemented a Sustainable Development (SD) plan to stimulate other measures to reduce our GHGs. 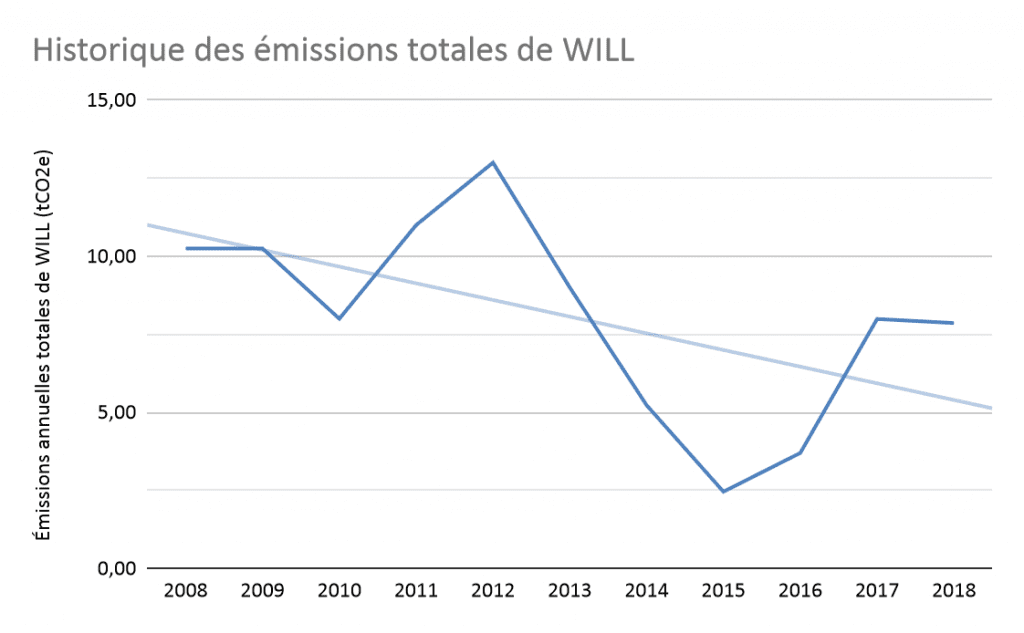 Figure 2 shows a downward trend in the intensity of total annual emissions from WILL since the start of the Sustainable Community initiative. However, these are dependent on project cycles, since the audit periods and the recruitment of new cohorts require numerous trips by car in various regions of Quebec. Transportation is by far the most significant source of GHG at WILL.

The next bi-monthly chronicles in 2020 will focus on the following themes: