Closing the loop, once and for all 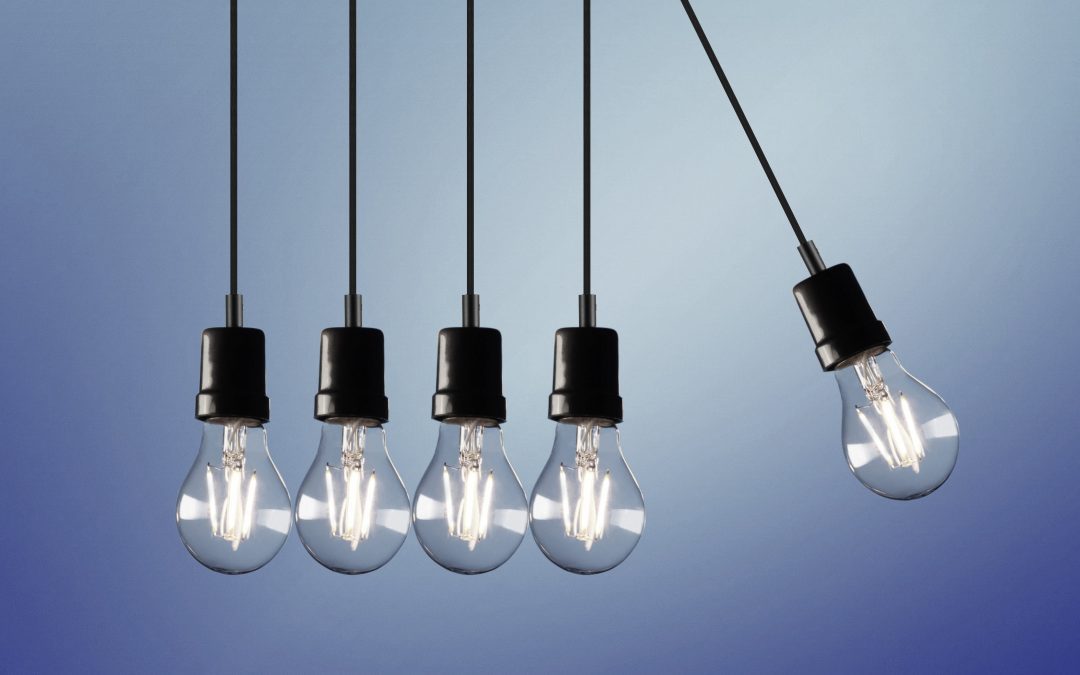 Cyclic processes such as water and nutrients abound in natural ecosystems. When species die, they decompose and integrate the soil with a range of nutrients necessary for the survival of others. Residual matter of one species is the food of the other: no waste is produced. The concept of undesirable material generation is a ubiquitous social construct in the human ecosystem on which the current economic model is based.

What if there were really no unwanted materials? If today’s waste becomes tomorrow’s resources? The circular economy is directly part of this ideology, drawing inspiration from the natural cycles of ecosystems. The creation of an economic loop that limits the extraction of raw materials and the production of waste materials reorients the effective economic model.

Let’s first paint a picture of the current economy (Figure 1).

The current economic model is called linear. Indeed, the continuum of “take, make, dispose” runs up against the finite limit of the Earth’s resources: it is not sustainable in the long term [2]. The raw materials are continually extracted from the Earth’s subsoil and then used as resources or energy resources in the production of consumer goods, which are then sold to users. After being consumed or when they no longer perform their function or when a new version of the object is put on the market, users are free to choose the fate of the deceased. More often than not, the object is transported to technical landfills, stored in warehouses or exported to other countries [3]. Significant losses in energy and natural resources are induced throughout the life cycle of objects [4].

Current production and consumption patterns lead to over-extraction of non-renewable natural resources upstream and too much material released downstream [5]. In Quebec, 6.2% of total GHG emissions are issued during the extraction and processing phases of resources and during the manufacture of products [6]. Also, community consumption patterns and property culture encourage industries to produce more at the lowest possible prices. Quantity takes precedence over quality. If the current situation is not sufficiently worrying, it is added that the middle class alone consumes 80% of the resources and that by 2030 it will count 5 billion people [7].

In order to ensure the functionality of this model, the extraction of an increasing amount of raw materials is necessary, but their reserves are depleted: this formula is doomed to failure. It is impossible to continue to evolve in this model without imposing a deficit in natural resources on future generations. A metamorphosis of the current paradigm is initiated through the circular economy. It re-connects this linearity into a leek proof and efficient loop that allows a sustainable flow of resources already in the circuit.

The circular economy: a virtuous cycle 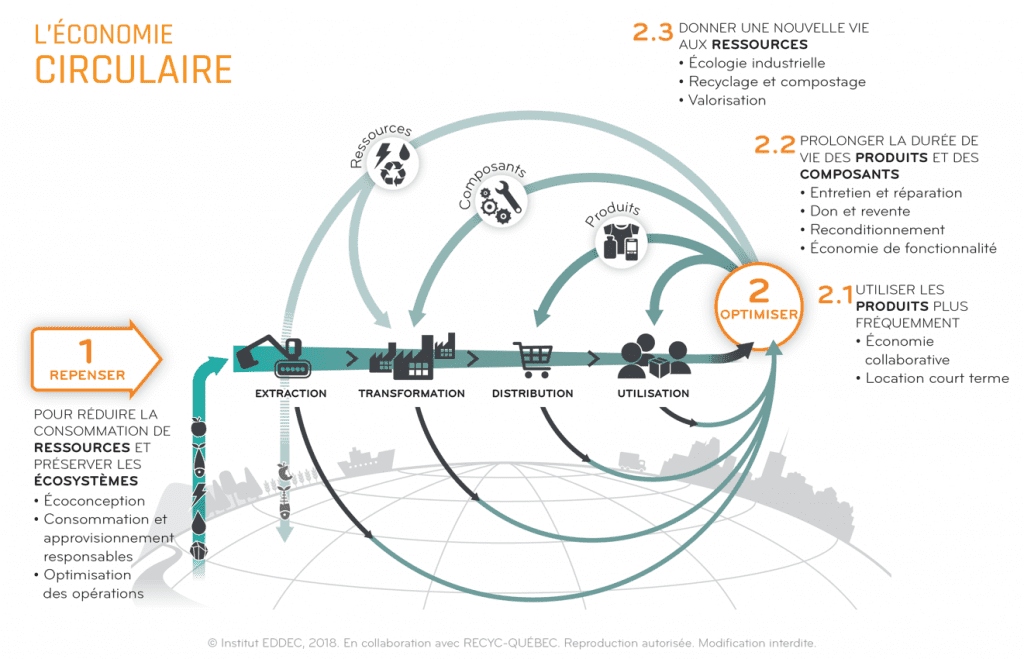 As a relatively new concept, the circular economy is making its way on a global scale. There is no universal definition of the circular economy, but according to the Quebec Circular Economy Consultation Centre, it is defined as a “system of production, exchange and consumption aimed at optimizing the use of resources at all stages of the life cycle of a good or service, in a circular logic, while reducing the environmental footprint and contributing to the well-being of individuals and communities”.

In other words, it is a question of stimulating economic and social developments while mitigating harmful impacts on the environment. Although it is impossible to release all pressures induced on the global ecosystem, the current model overhangs the physical limits of the planet [9].

The idea is to transform the linearity of manufacturing ecosystems into circularity by renewing consumer goods into energy and industrial resources through processes that minimize waste generation [10].

However, currently, less than 10% of the resources extracted are put back into circulation in the economy [6]. It is therefore that the concepts of the circular economy are far from being well-inked. However, in Quebec, regulations and policies are being developed to reduce the environmental impact of economic and human activities. One of the objectives of these policies is to reach 30% of the companies that have initiated a sustainable development of a circular economy and industrial ecology system [2]. Various studies and simulations of the global model have been carried out to guide political and industrial leaders in the development of action plans to increase the rate of circularization of matter. From these studies emerge a dozen strategies divided into categories on which the circular economy has its roots [6].

The concept aims to reduce the number of resources consumed upstream and preserve ecosystems through eco-design, responsible sourcing and optimization of industrial operations. Thus, from the moment the product is designed, strict environmental criteria are incorporated into the manufacturing processes.

Also, one of the objectives is to increase the use of products already in circulation on the market through the collaborative economy and by short-term leasing. This aspect rethinks the concept of property ownership. The consumer no longer owns the products, so maintenance and repair costs remain the responsibility of the company. The use of goods is thus optimized since they benefit several people rather than one. For example, Philips Lighting offers a light bulb rental system to businesses. When a light bulb is burned, Philips retrieves it, replaces it with a functional bulb, then repairs the old one to reintroduce it into the cycle of its products [12].

Through maintenance, repair, donation, resale, reconditioning and functionality savings (sale of the use of a property rather than the property itself), the duration of use of products and components is extended.

The cycle can be divided into two categories depending on the type of product: one technical and the other organic. On the one hand, the technical cycle includes consumer goods and resources that can be recovered. As soon as they are designed, objects are conditioned to be disassembled and then repaired. Thus, the processes of recycling materials and energy recovery are optimized and put forward.

On the other hand, the life cycle encompasses organic matter. Natural processes such as composting regenerate decaying structures so that they can return to the earth with their nutrients. Human interventions can be combined with natural processes to make the energy recovery of these materials [12].

Industrial symbiosis is also an important part of the circular economy so that the wheel can spin well. The link between companies in the same industrial zone allows resources to be circularized on a smaller scale. The outputs of one can be the inputs of the other. By prioritizing geographic proximity, less energy will be required for the process of reintroducing resources into the loop. For example, Quebec-based company Loop makes fruit and vegetable juices from those that cannot be sold by supermarkets because of the lack of optimal freshness. The residual pulps of these drinks are then introduced into Wilder and Harrier dog treats [2].

It is through these strategies that the extraction of virgin raw materials and their waste can be reduced. In addition to ensuring a slowdown in the depletion of non-renewable natural resource stocks, greenhouse gas emissions would be greatly reduced. According to various studies, GHG emissions could be reduced by 70% for each country that implements an effective circular economy system. Decreased extraction of raw materials, decreased transport of residual materials, increased use of renewable energy, composting and energy recovery are all integrated factors in the circular economy that promote GHG reduction [10]. Finally, the new model ensures prosperous economic development by creating jobs. Ecological engineering, eco-design, energy recovery and efficient recycling are just a few areas where job opportunities would flourish. Countries’ GDPs would be growing and there would be relevant opportunities for investment and development of new markets. A reduction of only 1% in the consumption of natural resources while optimizing the use of the material would result in 12-23 billion euros of economic activity [2].

Has a silver bullet solution been found?

Although the concept is new, governments are implementing policies that are modelled on the circular economy. The circularization of resources has many social, economic and environmental benefits. This solution, which integrates various spheres, is a way forward for future business and corporate models.

Some potential barriers have also been identified from the studies. It would not be possible to sustain endless economic growth on a finite planet. The concept does not seem to take this factor into account [13]. A country’s GDP growth can cause a rebound effect and reduce the environmental benefits expected by increased industrial production and individual consumption [2]. Businesses may have fewer new opportunities to expand their markets, and job creation may not be as broad as promised. Also, to allow a leek proof circular system, a change of mentality is needed among politicians, businesses and consumers.  A major reshaping of the pillars of communities is needed, a change that is not so simple and quick to induce. Finally, a lot of power is left to businesses and little to consumers. Since businesses still own property, this factor can contribute to social and economic inequalities as well as dependence on corporations. Some may see these factors as brakes and challenges that the circular economy could face [13].

Complex issues, of course, do not have simple solutions. However, the circular economy is rethinking the traditional linear economic model that is in great need of refreshment, due to a lack of resources to feed it ad vitam aeternam. Rethinking and reshaping the future through creativity, innovation, energy and industrial symbiosis is necessary to ensure the prosperity of present and future generations. The circular economy is a sustainable collective movement that binds consumers, businesses and governments together to form thriving healthy and environmentally responsible communities.